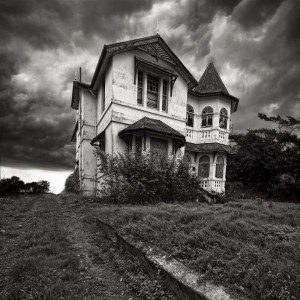 October may be known for lovely vistas and stunning fall colors in many locations, but in many other, fear is what this month is all about. Many creepy locations across the US will have your skin crawling with chills, whether you’re a believer in ghosts or not. The shocking history, alleged haunted locations and millions of ghost stories associated with these locations will have the staunchest person looking over their shoulders. Even if you don’t believe in the paranormal and these age old ghost stories, the one thing they are is spooky. Ultimate Excursions invites you to come with us as we take a closer look at 3 of the creepiest and most haunted destinations in the U.S.

During its years of operation, the Moundsville Penitentiary in West Virginia housed some of America’s most violent criminals. Nearly one thousand of them died here either by the electric chair or were murdered by one of the cohabitants of the prison. The prison closed in 1995. According to those who are brave enough to visit, it is said that many of the tortured souls never left. You might even hear them or see them on one of the prisons tours they now offer.

Stay in Virginia for another haunted excursion. The Trans-Allegheny Lunatic Asylum first started housing patients in 1864. It was home to thousands with mental illness in its 130 years of operation. Hundreds of them died here before they closed their doors in 1984. The grounds were thought to be haunted long before the asylum though, as it was a former military post during the Civil War. They now offer a variety of tours from 2-4 hours, and for those who are truly seeking spine tingling chills, you can take part in the Ghost Hunt, which is an 8 hour overnight experience with ghost hunting guides.

In Philadelphia exists the only Revolutionary War battlefield which is still intact. Fort Mifflin was built in 1771 and features 14 restored buildings along the Delaware River. According to past visitors of this location, there are plenty of sprits to cross paths with here. One of the more vocal ghosts has a scream that has actually drawn the Philadelphia Police to investigate. Other purported ghosts include a faceless man and even children and dogs. This place will be sure to have you breaking out in goose bumps.

Looking for a good scare this Halloween right here in the U.S.? You will likely be looking around every corner and over your shoulder at all of these and hundreds of other amazing destinations found here.